TTF-1 is present in normal thyroid and neoplastic thyroid tumors such as papillary carcinoma TTF-1 is present in the majority of pulmonary adenocarcinomas (73-76%) and pulmonary small cell carcinomas (83%) A smaller proportion of large cell undifferentiated lung carcinomas (26%) stain for TTF-1 Squamous cell carcinomas of the lung do not stain for TTF-1 Malignant mesotheliomas are negative for TTF-1 Cytoplasmic staining for TTF-1 can be useful in identifying hepatocellular carcinoma Papillary nasopharyngeal carcinomas have been reported to stain for this marker A small proportion of breast cancers will stain for this marker (2.4% of 546 primary breast cancers in one study) Small cell carcinomas of the prostate are positive for TTF-1 Colorectal adenocarcinoma (including metastatic to the lung) can show diffuse, moderate to strong TTF-1 positivity. It is estimated up to 3% of colorectal adenocarcinomas will be TTF-1 positive with the TTF-1 clone we use (Dako clone 8G7G3/1). While the majority of these cases will demonstrate weak TTF-1 positivity, diffuse, strong positivity can occur Other tumors have been rarely reported to be TTF-1 positive (nuclear), and include cholangiocarcinoma, endometrial, ovarian, gastric/esophageal, cervical, pancreatic ductal, urothelial, hepatocellular, adenoid cystic, other salivary gland carcinomas, and adrenal cortical carcinoma. Typically, these tumors will show expression in a small fraction of tumor cells 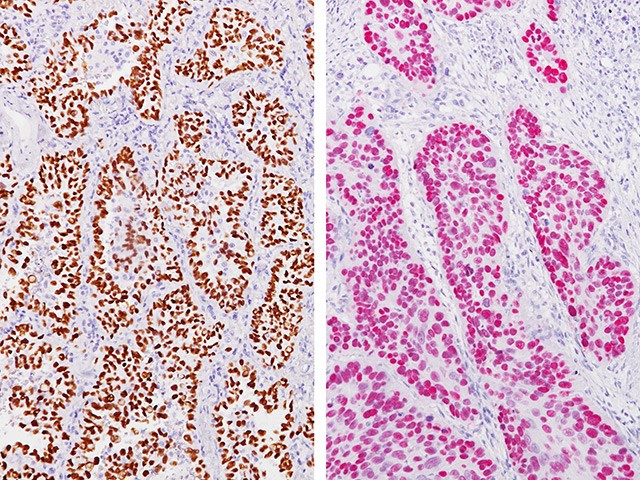